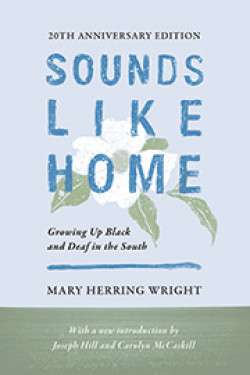 Sounds Like Home. Growing Up Black and Deaf in the South

—From Mary Herring Wright’s Foreword to Sounds Like Home

Originally published in 1999, Sounds Like Home adds an important dimension to the canon of deaf literature by presenting the perspective of an African American deaf woman who attended a segregated deaf school.

Mary Herring Wright documents her life from the mid-1920s to the early 1940s, offering a rich account of her home life in rural North Carolina and her education at the North Carolina School for the Deaf and Blind, which had a separate campus for African American students.

This 20th anniversary edition of Wright’s story includes a new introduction by scholars Joseph Hill and Carolyn McCaskill, who note that the historical documents and photographs of segregated Black deaf schools have mostly been lost. Sounds Like Home serves “as a permanent witness to the lives of Black Deaf people.”

Mary Herring Wright (1923–2018) grew up in Iron Mine, North Carolina. She began losing her hearing at the age of eight, and was completely deaf by age ten. In 1935, her family sent her to the North Carolina School for the Deaf and Blind, where she was both a student and a teacher.

She then moved to Washington, DC and became a clerk for the US Department of the Navy. She later returned to her roots in North Carolina and raised a family. Mary Herring Wright was awarded an honorary degree from Gallaudet University in 2004. "