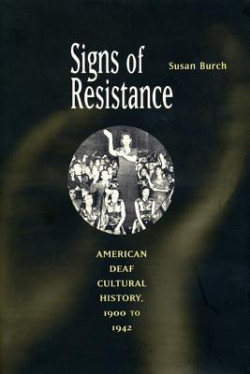 "During the nineteenth century, American schools for deaf education regarded sign language as the "natural language" of Deaf people, using it as the principal mode of instruction and communication. These schools inadvertently became the seedbeds of an emerging Deaf community and culture.

But beginning in the 1880s, an oralist movement developed that sought to suppress sign language, removing Deaf teachers and requiring deaf people to learn speech and lip reading. Historians have all assumed that in the early decades of the twentieth century oralism triumphed overwhelmingly.
Susan Burch shows us that everyone has it wrong; not only did Deaf students continue to use sign language in schools, hearing teachers relied on it as well.