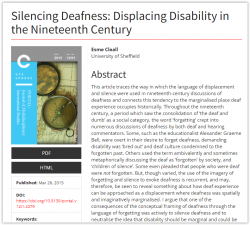 This article traces the way in which the language of displacement and silence were used in nineteenth-century discussions of deafness and connects this tendency to the marginalised place deaf experience occupies historically.

Throughout the nineteenth century, a period which saw the consolidation of ‘the deaf and dumb’ as a social category, the word ‘forgetting’ crept into numerous discussions of deafness by both deaf and hearing commentators. Some, such as the educationalist Alexander Graeme Bell, were overt in their desire to forget deafness, demanding disability was ‘bred out’ and deaf culture condemned to the forgotten past.

Others used the term ambivalently and sometimes metaphorically discussing the deaf as ‘forgotten’ by society, and ‘children of silence’. Some even pleaded that people who were deaf were not forgotten.

But, though varied, the use of the imagery of forgetting and silence to evoke deafness is recurrent, and may, therefore, be seen to reveal something about how deaf experience can be approached as a displacement where deafness was spatially and imaginatively marginalised. I argue that one of the consequences of the conceptual framing of deafness through the language of forgetting was actively to silence deafness and to neutralise the idea that disability should be marginal and could be forgotten.