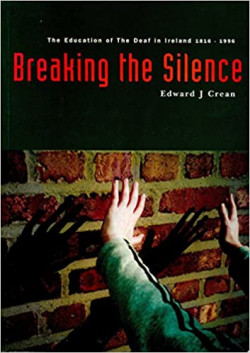 Breaking the Silence: The Education of the Deaf in Ireland 1816-1996 by Edward J Crean, looks at how education of the deaf has evolved, unravelling myths and fallacies in the process. Since his son was born in 1960, Crean has found himself struggling, he writes, with an "almost palpable ignorance among the general public and the professions regarding some of the most basic knowledge of what the deaf really need in education".

According to Crean, since the introduction of oralism (learning through lip reading) in schools, there has been a dramatic decline in the standard of education among the deaf. Before oralism was introduced in the 1940s, they learned through sign language - and Irish standards were internationally recognised as high. There are now moves to raise awareness of sign language and reintroduce it into the classroom. Fergus Dunne is education director with the Irish Society for the Deaf (ISD). "I went to a school where we learned through oralism. I knew how to sign because my parents were deaf and we used sign language at home. But oralism was considered superior, it was seen as a way to `normalise' deaf people, and signing was a bit embarrassing," he says.