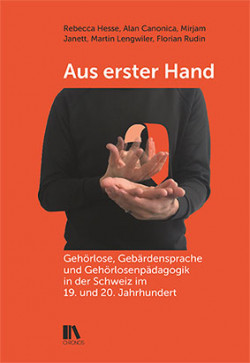 Translated from German by Google translate

"For a long time in the 19th and 20th centuries, the deaf were considered a group of disabled people. One of their peculiarities was sign language, a form of expression that separated them from the rest of society.

Today the deaf see themselves as a cultural minority. Your identity is based to a large extent on sign language. They refuse to label deafness across the board as a disability.

This book sheds light on the changeful history of the deaf in Switzerland in the 19th and 20th centuries. The focus is on the places where the hearing society and the deaf community met, in particular the institutions for the deaf and dumb and later language schools that taught using the spoken language method until the 1980s.

What pedagogical approach did the deaf schools and institutions maintain with the deaf? How have pedagogical models changed, especially with regard to sign language? And what effects did schools have on the social marginalization of sign language and on the lives of the deaf?

The study is based on broad archives and numerous interviews. For the first time in this study, those affected have their own say: deaf people of different generations, but also a number of school officials. They tell a hitherto largely unknown story of a social minority - firsthand."