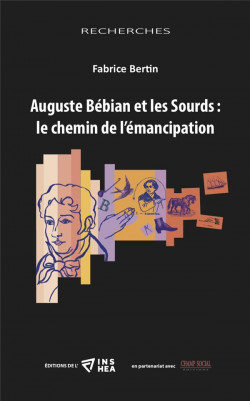 translated from French by Google Translate:

"A mythical figure for some and unknown to others, Auguste Bébian (1789-1839) reflects the ambivalence of a History of the Deaf which is sometimes recognized, sometimes ignored. In the wake of  l'abbé de l'Épée, whose name has been remembered by posterity and who demonstrated the educability of deaf people on a large scale, this man was nevertheless the actor of an unprecedented upheaval, which goes beyond in many aspects the educational framework.

The objective of this research on Auguste Bébian, which combines in an unprecedented way biographical elements and analysis of his thought, is not to deconstruct the myth, but on the contrary to try to decipher the messages of which it is the bearer, and to grasp what it indirectly teaches us about the Deaf.

Born in Guadeloupe in 1789, it is on the other side of the Atlantic Ocean, in France, that this key figure fulfilled the majority of his destiny. Welcomed at the National Institution for the Deaf-Mute in Paris at the very beginning of the 19th century, his daily attendance with boarders made him the first hearing speaker perfectly mastering sign language, the natural language of deaf people, as well as the culture that is inherent to it.

Having become a teacher, he will never stop defending sign language as a linguistic system in its own right, in order to awaken the intelligence of deaf children, of whom "we do not pay more attention than to the light of the sun. which enlightens us every day ”: his numerous publications bear witness to a considerable modernity, unmatched to this day.

In the chain of events leading the Deaf to emancipation, later embodied by Ferdinand Berthier, this study shows how much Auguste Bébian's impetus was a determining link, although inversely proportional to his discretion."