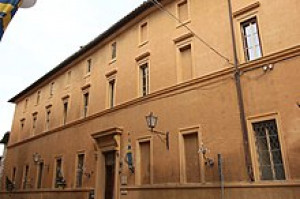 The Pendola Institute is a foundation established for the treatment of severe congenital deafness, located on Via Tommaso Pendola #35-43 in the town center of Siena, region of Tuscany, Italy. It has a long history, starting as a charitable institution founded by the Genoese Scolopi priest Tommaso Pendola (1800-1883) in the early 1820s, and promulgating an oralist therapy for the deaf-mutes. The subsequent decades have modified the funding and scope of activities.